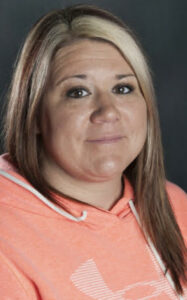 A call and a cry on the other end of the phone. Sometimes the cry of a newborn baby born a little too soon. Sometimes a cry of wife holding the limp body of her husband of 50 years Fire, accidents ,murders and every imaginable emergency are what makes up the day of a 911 dispatcher. Our hero Randi Dvorak was born in Billings MT in 1984 and raised in Worden MT

She applied with dispatch at the suggestion of Anne Kindness having grown up with Anne’s daughter. Her inspiration to be that Voice answering 911 calls was to be there for people when they need help, the excitement of the job and the responsibilities of the job to the community and her co-workers. Her aspiration became inspirations as she values and is valued by the people she works with Randi considers Billings first responders to be some of the best in the county. Her goal is to help other dispatchers excel in their career by being a friend and mentor . The work itself means being there for the community when they need someone the most.

Randi is known for her dedication and commitment often working overtime as a senior dispatcher to give relief to junior employees. This commitment to the comm center has its impact.
Of the hundreds if not thousands of emergency calls were not significant enough certain calls will stay with her for life.

All calls involving kids or elderly impact this mother of a 14 year old daughter. Randi recalls a homicide call where the victim ended up being a childhood friend of hers. She spent countless minutes on the phone with the suspect’s mother still not knowing the fate of her friend or her kids. That call didn’t end when she hung up the phone as she continues to speak to the victim’s parents and sister on a regular basis. She attended the sheriff’s critical incident debriefing as well as attending her friend ms funeral. She even wrote a victim impact letter to the judge during the suspect’s sentencing. This is a call that will never leave her. So often the dispatcher doesn’t know the end result of that emergency call that began with them. But there are moments that end joyously.

Randi is proud of her CPR save on the Tree of Life. Being the CPR instructor for the dispatch center, she takes pride in making sure each and every one of us listen and hear that need for CPR and stand ready to deliver instructions of the phone to aid the caller in saving their loved one’s life. 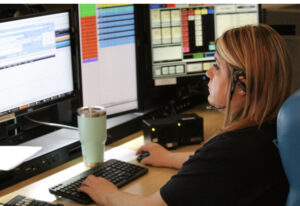 One such Medical call was a disabled male that had food stuck in his trach… it was a partial obstruction that turned into a full obstruction and he stopped breathing.
The odd part of this call is that this was normal Behavior for the boy so his mom (the caller) was rather nonchalant . All of a the sudden Randis says she couldn’t hear him breathing or making noises anymore – so she alerted the mom to take action.

Randi will never forget the 911 call from a man trying to get to a hospital from out of town battling winter weather conditions. As the 911 call connected the man’s wife gave birth . Being able to listen to the first moments of this child’s life, hearing the cries and listening to the parents joy in a conversation that was intimate and beautiful was a rare gift for this dispatcher.

A dispatcher, often overlooked when we are honoring hero’s. The hours and overtime are hard, the sounds and pleas often heartbreaking but the job they do is in Randi’s belief important and the community deserves to have someone that cares on the other end of the line.